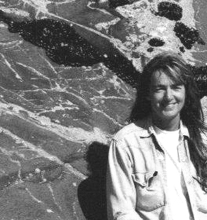 Deborah King was born in Dorset in 1950.
She grew up on Sandbanks Peninsula on the edge of Poole Harbour.

She trained in London at Hornsey School of Art, graduating in the early 1970s with
1st class honours. She then undertook a Post Grad year specialising in Illustration, establishing working links with the Zoological Society, the Natural History Museum and Kew Gardens.

LECTURING
1974-1998Deborah lectured part-time on Foundation and BA Courses at Bournemouth University and Middlesex Polytechnic in London. She was also a visiting lecturer at Southampton University and regularly visited schools, giving talks about her work.

Her paintings can also be found in private collections in the UK, USA and New Zealand.

MARINE
1982-1998Deborah returned to the Isle of Purbeck in Dorset, where she sailed her classic boat, later to inspire a series of ‘on board’ marine watercolours featured on this website. Her interest in sailing involved travel to the Bahamas and the Caribbean, and to classic boat rallies in the UK, St. Tropez, and Douarnenez, undertaking private commissions from New Zealand and the USA.

Travel to wilderness places around the world has inspired much of Deborah’s writing and painting, and
following a life changing trip to Alaska researching her latest book, she made the decision to move west in search of a less managed and more remote landscape in which to work.

CORNWALL
1998-2011From her harbourside studio in Boscastle, North Cornwall, she was later to produce two books dedicated to the culture, ecology and Celtic links of Cornwall, one of which was translated into the Cornish language. Both titles are published by wingbeat, as part of the Made in Cornwall scheme. [The visuals are complimented with verses, imagist in form, that are akin to verbal plumes, feathers of inspitation, compact, vivid and pertinent. Western Morning News]
REVIEWS: CORNWALL PAGE

2011-She now works from her studio close to Roaring Water Bay in West Cork, SW Ireland.